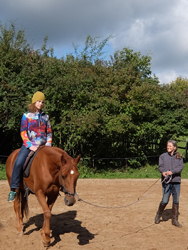 Developed in accordance with the Italian Renaissance principles of natural asymmetry and alignment, classical riding was first didactically developed under Louis XIV in France and taught at academies throughout the country. The term "classical riding" or "Academic Riding" has regained popularity today in connection with equestrian sports. Followers of this style of riding examine the principles of ancient masters such as Xenophon or Oliveira. The key ideas can be summarised as follows: a horse should be trained with kindness and logically structured exercises which are based on natural anatomy, balance and harmony. Training which does not disturb but instead supports natural movements, will result in a content and confident horse, who enjoys his work and can fully exploit his potential.
One of the most admired teachers of academic riding is Francois Baucher. He pursued the round, collected lines of baroque riding. "He achieved this in his work with all breeds of horses, by giving the rider such a reliably safe seat, that he had complete control over the horse's natural strength and could bend his horse in ways which would release the jaw, neck and back muscles and joints." (S. Loch) Baucher focussed on the correct angle of the head-neck relation in the horse and believed that the horse's energy is collected in the core of its body. This sounds very similar to the principles for using our own bodies which F. M. Alexander recommended.