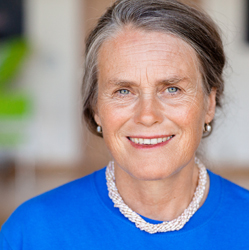 I have always been passionate about horses, even as a child. Being with them enabled me to escape the pressures of school and my parent's demands. When I started to train as an Alexander Technique teacher in the early 1980s, I was surprised to discover how much tension I was still transferring to my beloved world of horse riding. I experienced how the quality of my life improved when my movements became lighter and freer. I learnt that I did not have to make more effort in order to solve a problem, but rather the opposite. Through my AT training, I was able to hone my ability to pause for a moment (inhibit) in difficult situations, release and let go, giving me more freedom to apply the necessary means, without confusing my four-legged partner. Horses have a very keen sense of any change in their human partners, which they mirror directly in their individual reactions.

1985 I began to teach Alexander Technique and Riding

1991 Member of the Society of Teachers of the Alexander Technique, later of ATLVD and ATAS (all countries), since then regular participation in advanced learning and international teacher exchange meetings

seit 2010 I began to participate in seminars about Academic Riding with Bent Branderup, Hanna Engström and Marius Schneider.